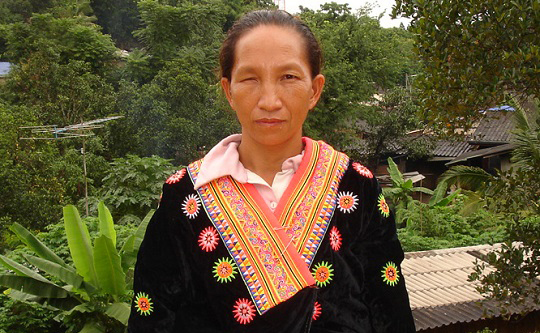 There are some specific moments in everyone’s life that may lead to a successful life or leave one in desperate straits. Living in Huay Luak village in the northern part of Thailand as a hill-tribe woman is something that can create great insecurity and instability. A hill tribe woman’s life can involve moving into new communities to search for new possibilities, and often this process has to be repeated again and again. One of the unheard stories of such a woman is about Mrs. Kalaya or Kao (Hmong name) who once lived such a life; today she has turned into a leader of the Hmong Artisans Group and has become a world standard handicrafts producer. Back in 2000, Kalaya was living with her husband in Huay Luak, a Hmong village, where they farmed, planted crops, and did other agriculture. Being farmers, they spent most of their time together farming until the day they met with the most unfortunate event of their lives.

There was one evening when a man approached Kalaya’s husband on his way back home from the farm and asked him to do him a favour. Could he bring a small bag to the village by his car? It is normal for villagers to help each other whenever they are in need. So, he simply accepted, with just the aim of helping a man; it was no problem at all to put the bag in the car. But unfortunately, he didn’t anticipate that the bag would bring him trouble and separate him from his lovely wife, Kalaya. After a few hours of driving, the police stopped the car at a check point for security purposes and found yaba (amphetamines) in the small bag which was given to him by the man. There is no way out, no release, if yaba is found in one’s hand. There is a strong penalty when the drug laws are broken, and Kalaya’s husband was sentenced to 30 years in prison when the judge made his final decision. It was that day that this lovely couple had to part from one another and Kalaya begun to struggle through life with 3 children. Indeed, she tried in many ways to prove the true story about how her husband received the yaba in order to get her husband released from prison. She spent lots of money beyond what she could afford. She sold the farm and land that they owned, but nothing changed; everything was gone and she faced a worse life in Huay Luak village.

In 2003, Kalaya made a decision to start a new life in Lamphun City, twenty kilometers from Chiang Mai. She passed through this dark period of her life by selling flowers, sleeping beside the road just near the market, and earning a small amount of money, just enough to live hand to mouth for her family. On a certain day, Harry (Managing Director of Thai Tribal Crafts) met Kalaya unexpectedly in Lamphun while
he was there on some business issue. Harry learned of the pitiful life of this Hmong woman of one of the hill tribes in northern Thailand. Then he asked if she had some skill in making Hmong traditional handicrafts. He came to find out that she was good at making Hmong Batik. Knowing of the impressive skill of Kalaya, Harry suggested that she return back to Huay Luak and become a TTC producer instead of living in Lamphun in this awful life. He promised that TTC would try its best to provide orders in the future. Kalaya was very pleased to hear this and agreed to do what Harry recommended.

In 2006, Kalaya returned to Huay Luak where she applied herself with strong commitment and began a new life for her family once more. She also became a team leader of the Huay Luak Hmong Producer Group. Today, with training and the dedication of Thai Tribal Crafts Fair Trade, this group has been producing world standard Hmong Batik cloth and getting regular orders through the TTC market channels. Among the thirty thousand Hmong people living in Thailand, the Huay Luak group enjoys living in a village less expensively and is able to preserve the dignity of their hill tribe roots.